Hi all,
I've been having a problem with an invisible wall causing cars to fly/act strangely. Typically what happens is a car will get squeezed or pushed up against the wall, and the car will be shot upwards or stick to it, sometimes defying gravity.
Video:
3ds Max screenshot, the translucent faces make up the invisible wall. 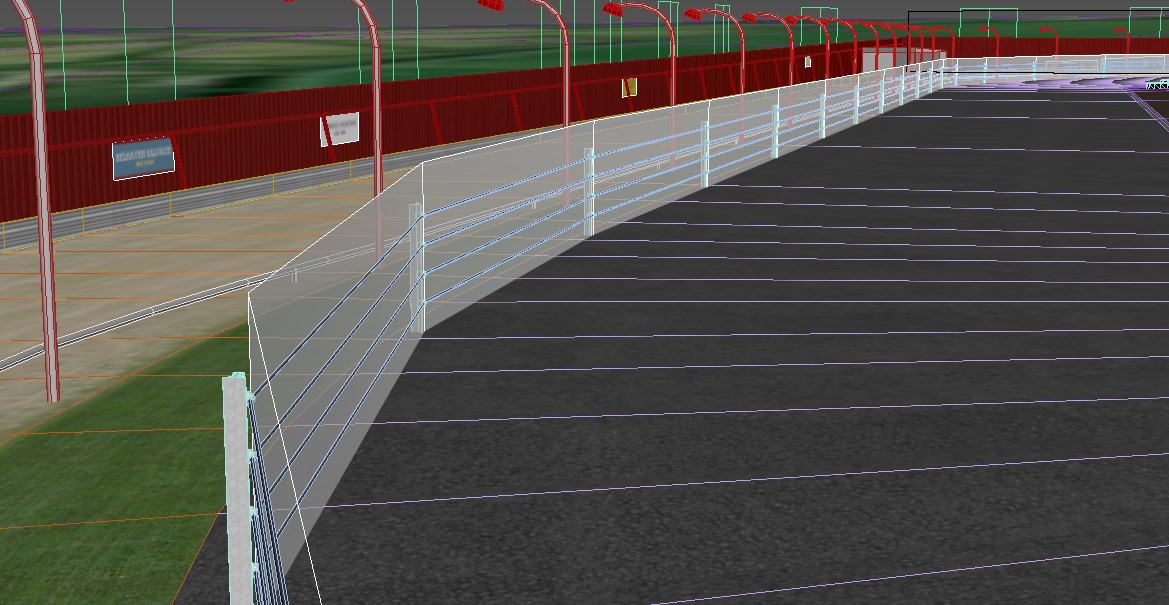 The problem occurs all the way around the track, but is at its most noticable on the bends.
The 4 wires bordering the track have their collisions disabled. I've disabled collisions on the white posts to rule them out as the cause of the issue.
I've tried adjusting the invisible walls height to be low down matching the posts, increasing the height to create a huge boundary wall, and I've also tried scaling the top edges inwards (almost like a cone) to try and keep the cars down, but nothing has helped so far.
The #surface type of the wall doesn't seem to make a difference.

Has anyone ever had a similar problem, or know of a solution?
Thanks,
Mark

Weeked Smasher
Master Blaster
Strange.. WF does not like objects with 0 thickness, might try adding a bit width to them instead of planar polygons (single sided). Also, add #concrete_barrier to the material make it so that the wheels will not interact with the object, only the car body. Hopefully that will prevent some of it.
S

Try assigning a collidable surface to the invisible walls but disable tire collisions.

#global_barrier is another one that should be safe to use.

Thanks guys! Both #concrete_barrier and #global_barrier resolve the flying issue, although they don't have collision sound effects.
I've found #metal_barrier ignores tyre collisions too, and has a collision soundeffect, so I've gone with that one.

Just been plagued with this issue again despite using various #xxxx_barrier tags, but discovered a pretty interesting reason as to why the issue occurs, and the solution.

The walls I had been using did not have any proper UV mapping.
Cars would fly up and ricochet off the wall when colliding with it, and when wallriding, cars would stick and dig in to the walls too, sometimes catching and spinning the car around.

With conventional UV mapping applied, cars now collide as they should do, and when wallriding, cars will glide along the surface as expected.


I find it really strange that UV mapping would play any part in collisions, but I've also had it occur in the past with drivable surfaces.
I've found that with floor surfaces that haven't had any UV mapping, the car tends to stick and slide about sporadically in an unusual manner.
It's almost like the UVs are dictating which direction the car should be travelling in!

I've attached an image showing the cause and solution, whether the UVs are in the 0-1 space or not doesn't seem to matter.