First out I would like to thank the original developers / creators of these cars, Stainless (Carmageddon). The base models and skins are originally created by them and edited / tweaked by me to work with Wreckfest

Info
All cars have a bit of custamization to them, in terms of skins, part swaps, alternatives and so on. It is a bit of a mess in the custamization menu and a bit "unlogical" (as I did now know the right names for things), so please take a look there to see what is there. Specially if you seem to miss certain parts on the cars. There also are custom AI-sets configurations, enabling you to race with only certain cars. This can be selected by the option menu under track selection. Lastly, custom cameras are also included.
PS: Sorry the filesize, the skins takes up most of the space, but felt I had to include them all.

The road ahead
More cars and parts will be added as I continue to work on this. As it is fresh waters for me don't expect the greatest things - yet!

Additional credits
Sam Gibson and Janne Suur-Näkki for answering all those questions through the development process. Thanks a lot!

Team Bugbear Member
Sweet! Can't wait to try it out. Is it possible to set the AI to only use this car? Oval racing would be pretty epic in these

Weeked Smasher
Master Blaster
Yes You can make them all drive Tashitas, in both variants and A / B class.
Thanks

Looks really good TVE! gonna try to see if I can get them to work in the previous WF build now since I play that one for now. Cheers bud!

Edit: well that failed trying to play on previous build. should of remembered there is a new directory structure in latest build lol.

Team Bugbear Member
Had a quick go and it works pretty well, good job.
A few things I noticed though, not sure if you already had plans to change any...
The wheels/tires are extremely dark, original car had bright chrome/steel wheels as far as I know? Looks very strange on the brake disk too where it has a (rust?) texture over an almost black texture.
Glass textures also black? Making the front clear (or turned on) and rear lights work would be nice.
Handling could be better, feels just like a standard american to drive.
And finally, why did you make the driver a kid? Haha 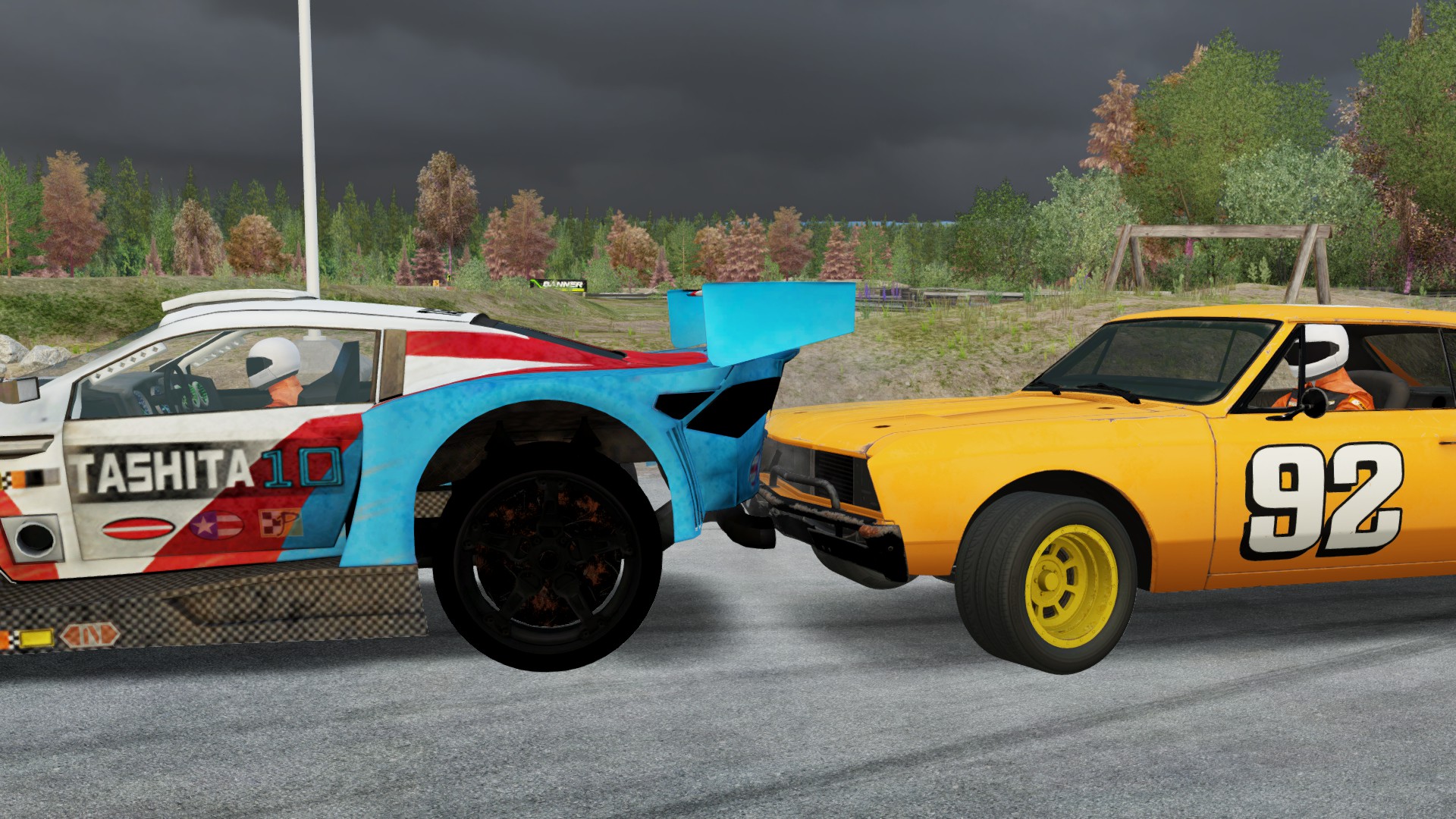 At first I thought the car was off scale because of how small the driver looks in the seat, but then I noticed with other cars around that the driver looks much smaller.
I'm going to guess you did it to make the drivers legs not poke through the floor of the car, otherwise I have no idea. If that's the case just reshape the original drivers legs to bend his knees more so he fits inside properly.

I also liked the use of the release effects, I used it a while back on a mod I never finished. Where I had an exposed fuel tank release with a fireball.
Anyway, cool to have a different kind of car

Weeked Smasher
Master Blaster
I probally will end up fixing those black light glasses later (the next coming days), as I agree black was not intentional. Brake lights I have not dwelved much into, so probally it will be breakable glass at the outside and the normal skin or a light bulb texture inside that.

As for the tire texure they are the original deal, but I suspect the specular is somewhat intreprid different in WF / something whent wrong in the export, so will probally play around to make them more in the direction og grey / light grey.

As for driver it started out as simply being dragged over from the example car, but the car just was too big compared to other WF cars. Therefor the size was reduced by about 20%, guess I forgot to resize the driver back after that haha. Will fix that

The brakes, yeah, needs to be something of lighter color here as well, and without rust. The material naming is a bit mad, and I suspect that I kind of forgot to fix some textures for it. Will try to sort it all out within the coming days, thanks for feedback

Edit: oh and your right, base is the new AM car, both in terms of sound and handling. Nothing fancy, fast and deadly

And ahh, haha now the drivers small size makes sense
But yeah check the normals+spec map of the tires+wheel textures, comparing them with some original car textures for comparison should help. But I imagine its alpha channels and possibly setting the right colours (colour channels on the texture set how reflective the material is and other properties) and yeah same thing for vehicle glass.
Getting working rear lights is very easy too, again check some original car textures to see how that works. Euro custom was my first attempt at it and I was surprised by how simple it is.

But yeah works well, once these small things are fixed it will be a pretty nice mod

Weeked Smasher
Did you get the release effect to work without crashing the game after every race?

Weeked Smasher
Master Blaster
The game crashes if you exit it while one release effect is active, but if not active it should work. Right now there is a small explosion effect when hood is lost, and after that there is six seconds of smoke. If you end event in that time shit hits the fan, but if you wait til it's gone everything is ok.

Steeringwheel - the damned thing desided to flip 180 degrees in wrong direction regardless of what pivot point magoc I did or joint settings or model settings.. so kind of though "feck it". Could probally just copy over the steering wheel from the example car, I'd say a maybe to that.

Le lights, ugh, fine ;p I'll look into them when I have sorted out the other things hehe.

Weeked Smasher
Master Blaster
Hmm, worth a try, thanks!

* The driver has now matured, I'd say about 20% since last update. Should be of same size as the other drivers now
* The lights now has correct textures, altho there is no brake glow effect at current time
* The backlights coverss textures has been updated from black to transparent glass, which in addition can break and fall off when enough force has been applied
* The rear bumper should detach easier now
* The textures on the wheels and rims has been updated
* Brake disc texture is updated as well. Please note that to "break the patern" these disc has a bit of dirt, mud and rust added to them, altho one could argue this is pretty far fetched from reality..call it artistic fredom!
* Steering wheel "fixed" (in reality exchanged but oh well, it turns!)

Team Bugbear Member
Is that a purple skin I see!

You know, when we go to host The Very TrackPack, we going have to load The Very CarPack, too.

I predict someone going be hosting The Very TrackPack and The Very CarPack on the first Saturday of October, Oct 7th.

Weeked Smasher
Master Blaster
It is haha! And feel free to do that, would just make me happier

Wheels being brighter changes the appearance a lot, still needs some more work on the tire though, looks a little strange.
Lights look great now, though maybe add a small amount of opacity to the rear light glass? (to give a very slight black tint to the glass for a smoked effect) a little too clear in my opinion.
And the driver grown up fast
Steering wheel is the size of the original wheel from the car? Seems a bit small, either way he should hold the wheel instead of using his Jedi powers. It's against the rules!

Weeked Smasher
Wheel radius look a bit big in that screen tor. Like you've only got a tiny contact area with the ground.Make the physics tire slightly smaller so its not almost floating.

Weeked Smasher
This car is great! My only complaint is that its hitbox is bigger than the car model.

Weeked Smasher
Master Blaster
Thanks for feedback Speaking of tyres, what is a good / realistic wheel radius?
About hitbox, same happens on both models, and os it the back or front being the issue?
Lastly, about tyre, what you mean by needing fixes? Is it the size, color or other that is the issue?
S

The Very End said:
Thanks for feedback Speaking of tyres, what is a good / realistic wheel radius?
Click to expand...

Depends on the wheel model on your car. Id leave that at whatever size it is originally but make the radius of the tire 'parts file' slightly smaller than what you currently have.
You must log in or register to reply here.
Share:
Facebook Twitter Reddit Pinterest Tumblr WhatsApp Email Link
Top