HIGHLIGHTS
We're pleased to announce the availability of Tournament Update!

The eponymous Tournament Mode is all about putting your racing and wrecking skills to the ultimate test by competing in thrilling challenges, not only against the game, but also against the other players! It all boils down to being a boss by winning trophies in challenges and earning fame, with new challenges coming every day, every week and every month, and then using the acquired fame to claim exclusive rewards from the tournament shop, with new epic rewards each season. The daily challenges are like bite-size snacks, a fun thing that you can tackle each day to prepare you for the real meat of the Tournament Mode: the prestigious weekly and monthly challenges that make you face-off with other players around the world in exciting time-limited leaderboard challenges, with the goal of conquering the leaderboards and being crowned the undisputed king of demolition!

Some of the Tournament Mode events are completed with DLC content, but in case you don't own the specific DLC no need to sweat because everyone can join! That also goes for the computer-controller AI Players, so for the first time you can actually race against computer-controlled DLC cars and special vehicles. We've also used the opportunity to tune the game for Tournament Mode so you can expect maximum action and maximum damage – in short, maximum carnage!

Speaking about DLCs, there's a new kid on the block: American All-Star Car Pack! This new pack adds three new American heavy-hitters to rule the roost, each offering a different kind of gameplay experience. Grand Duke marks the return of the demolition derby royal that packs some serious punch, Wildking is a true American icon with a plenty of power to go forward fast, and Little Thrasher is great little truck that punches above its weight.

And of course, that's not all. Our love letter to the demolition derby fanatics gets another chapter in this update, and we're adding another new free demolition derby arena called The Maw! This one's like a deranged brother of Hellride and takes the battle onto a platform high-up, with the wimps and losers facing their untimely demise by falling off. In other news, we've also massively improved the loading times and dialed in a number of tweaks to help with online stability. We're also constantly working on improving the gameplay experience based on the feedback, and this release contains numerous other improvements and additions. Please find below a complete summary of items fixed or improved upon in this release.

Full time wrecker
I look forward to trying this out! Havent tried on PC yet but for Xbox One, the game crashes after pressing A to start

Full time wrecker
Please help me, this is what I get after the update, and my PC freezes.

Firebird said:
I look forward to trying this out! Havent tried on PC yet but for Xbox One, the game crashes after pressing A to start
Click to expand...

They're working on the Xbox/ps4 issue.

The Very End said:
Do a Steam file integrity check.
Click to expand...

How can I do something like that? Getting the same massage.

Team Bugbear Member
Ya right now, if you get an error after downloading the new PC update, will need to verify WF files. Here where to go: 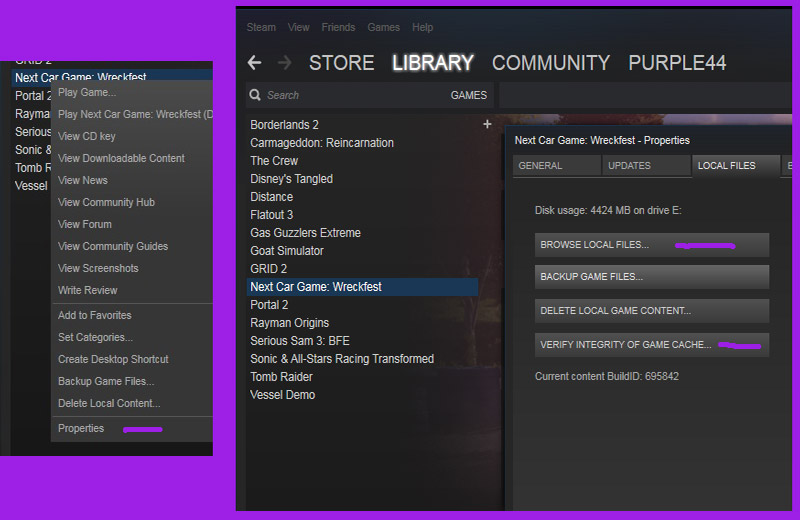 Hello ! Somebody know someting about the bug on xbox one screen say hit A and crash thx you if you respond =)
K

I want online Tournament with Real people in race.. Not AI Bot.. This Is crap For me.
S

All the parts are missing except for engine but theres nothing in it? is there a new way to mod the visual suspension settings? thanks
Last edited: Apr 29, 2020

Noizze breaker said:
Hello ! Somebody know someting about the bug on xbox one screen say hit A and crash thx you if you respond =)
Click to expand...

They're working on a fix...

Still no update for Xbox crash. Is anything being done for it?

Staff member
Full time wrecker
Yes, they're busy finding a fix. They said they had a lead...
T

I hope some of the multiplayer challenges from the tournament will be time attack with no AI at all !

Staff member
Full time wrecker
New challenges will be added so who knows?
The rewards will rotate btw so they change as well...

Trying out the Tournament with the Truck...lol...buggered if I can get a high score...so I thought I would take some screen shots instead.
Great work on the Promo Video, highly entertaining and the free American All-Stars Car Pack is fantastic...keep up the great work Bugbear

As a PC Gamer who doesn't have the game on his PC but on his PS4 Pro, have you unlocked the framerate? Sony's MotionFlow helps... But... Come on... We need 60 FPS
T

Why is there a 1000 players limitation on the tournament community challenge ?
I'm 339 out of 4200+ scores on the leaderboard but game still says I'm in the 34% best.
It's a little bit discouraging, as the more people play the harder it will be to get the reward. And even 40% of the 1000 best won't get anything...

It would be better ton consider all the players and maybe reduce the winner parts. Something like :
40% bronze
20% silver
5% gold

Staff member
Full time wrecker
Here's a hot tip: drive at a medium pace (2nd gear) and try to follow the AI racing line as much as possible. Keep the momentum of hitting cars going to increase the multiplier. And use the handbrake in the hairpin so you can get a slide as to hit more cars at once...
You must log in or register to reply here.
Share:
Facebook Twitter Reddit Pinterest Tumblr WhatsApp Email Link
Top