I think it's all of them, except the ones around the lake.

Weeked Smasher
Master Blaster
Alright, think I found the culprint for it, and have uploaded a hotfix. I'll address the AI issues tomorrow morning.
Thanks for reporting

Team Bugbear Member
I must say, besides being a great looking track, I really like the work you did on the video. 8)

The Very End said:
Ah smart! Did not think about narrowing the sector itself, I'll do tests tomorrow thank you
The AI performs overall good I think (in game), it just ... well, it does not understand the concept of braking from 230 km/h into a 90 degree turn. In the initial tests the cars flied off the track in T1 in about 120 km/h haha
Click to expand...

Do you need to narrow aisector or just the red safe border lines? 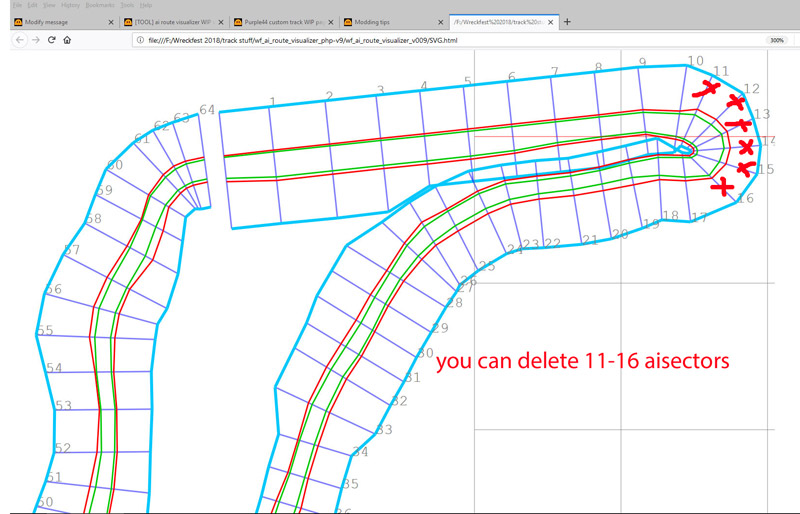 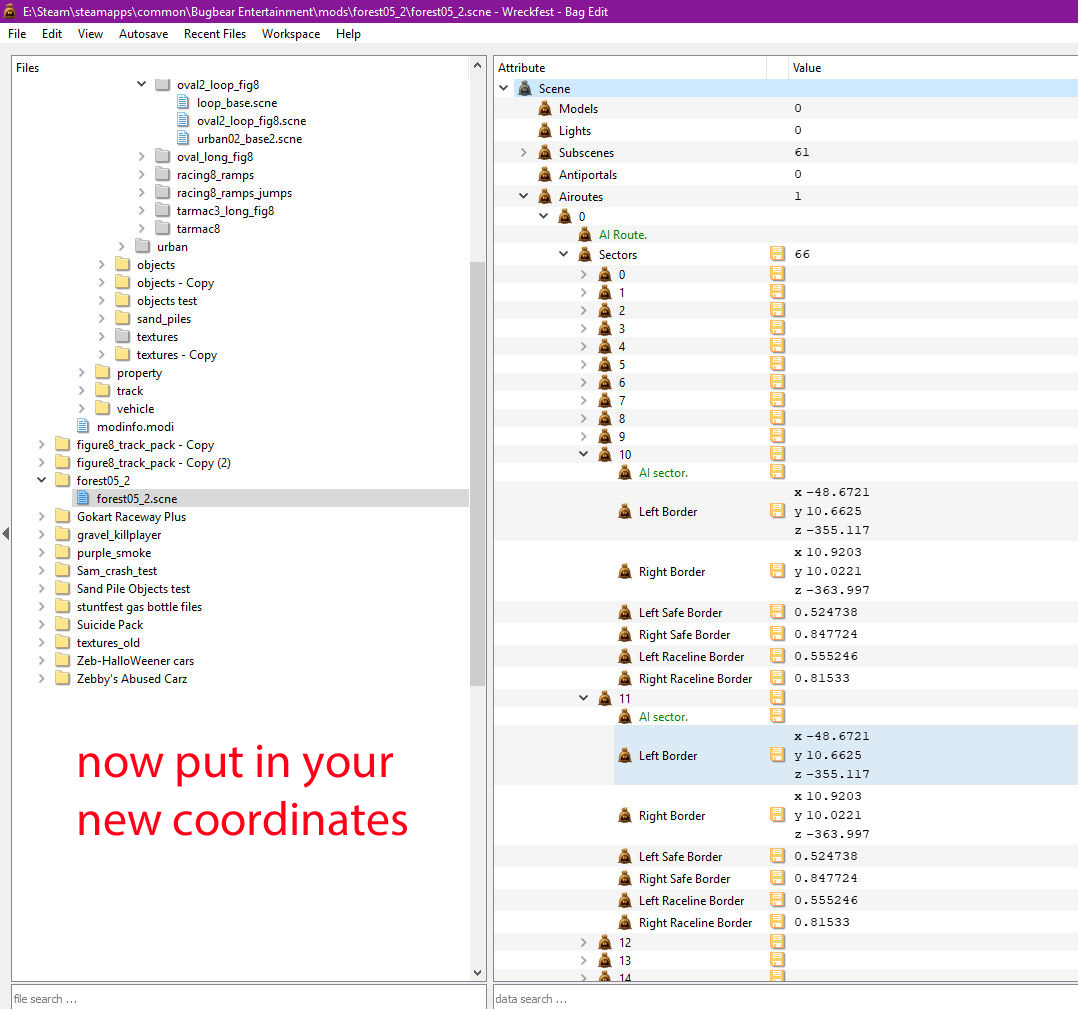 Have pick an aisector further enough away from turn so AI cars brake in time.

Have give your new track a spin tonight End. Have not had a chance to fire up Wreckfest yet today.

Weeked Smasher
Master Blaster
Yeah I was stupid and forgot to narrow the AI_race sectors, they were are broad as the road hence they really did not like it. Doing heavy testing now and think I will have a hotfix out in the next couple of hours

Team Bugbear Member
I think I found my next Cops and Robbers playground. 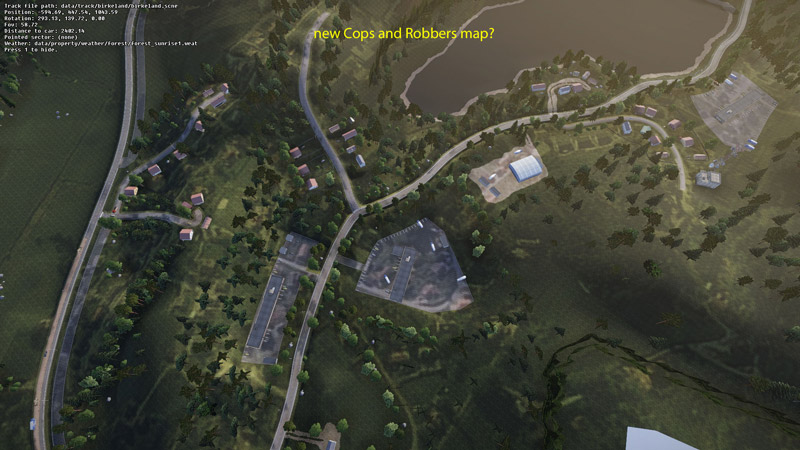 I found one the wooden bridges. 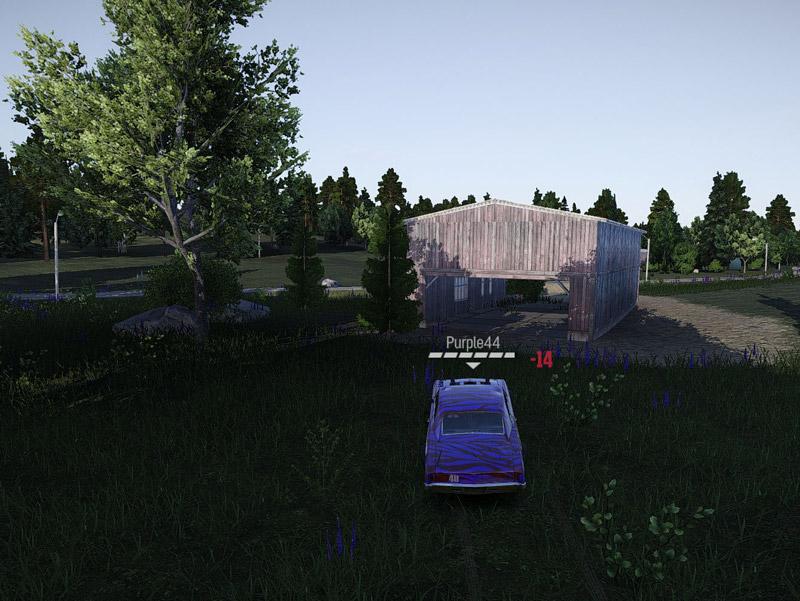 End, got a question about the road signs: 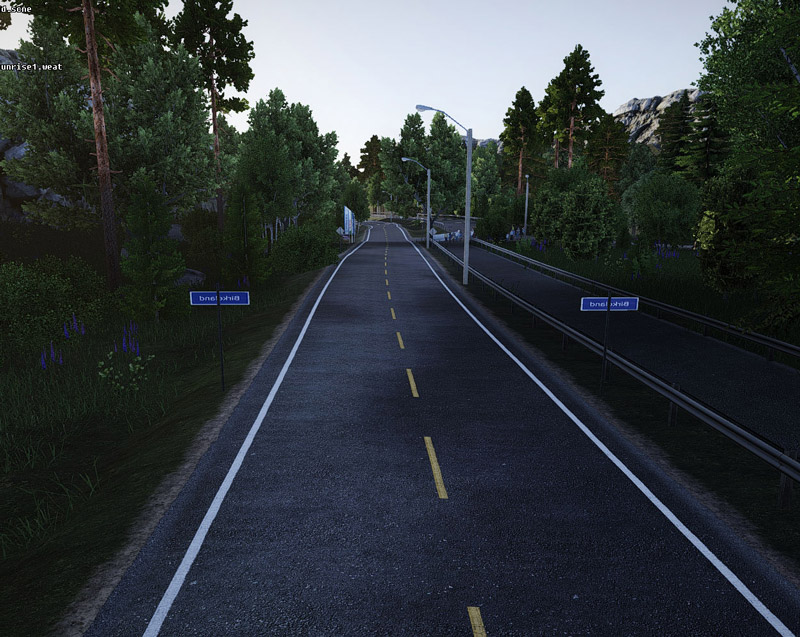 Should you have one sign facing one direction and the other sign facing opposite direction. So if going forward or reverse track version, can still read the sign?

This track keep you on your toes. Also a lot of wrecked AI when I made my second lap!!

Weeked Smasher
Master Blaster
Thanks for feedback!
The idea is that the signs are only faced in the main direction, as you are offical in Birkeland when passing them. If you look at the lake there are similar ones, that will look right when you drive the other way The other signs, such as the yield signs are placed facing diferent directions related to the crossings, e.g. when exiting a crossing you should be reminded that you are on a non-yield road (the yellow and white one), hence why there are more of them. IIRC in Norway you have to have double signs when entering new zones, such as new speed zones, yield zones and similar, that's also why I chose to have double-signs in same direction. Then again, it is just flavour, not really needed, and I have skipped creating the speed zone signs because... well I have to prioritize my fights

Also, a new version is soon ready for upload (I'll edit post when done), which features following changes;
* A "night" version added, with lights. Remember that you have to change the weather settings to find something that matches (use weather mods)
* Improved AI's, altho they are still bad. Tried every trick in the book but it seems I lack the knowledge of how to get them to behave better
* Cameras fixed. Not brilliant, but they are functional. Most people that want to create videos usually use free-cam, and thus I have made it so that you can use the free-cam up to 1000 meteres away from the racing line, e.g. you can zoom out almost as much as you want and laugh at the details I have tried to hide
* The fence at the bridge does not have collisions
* A very minior performance improvement (a bit simplification to the splatmap / texturemap), and fixed a dirt area that overlapped too much with the road 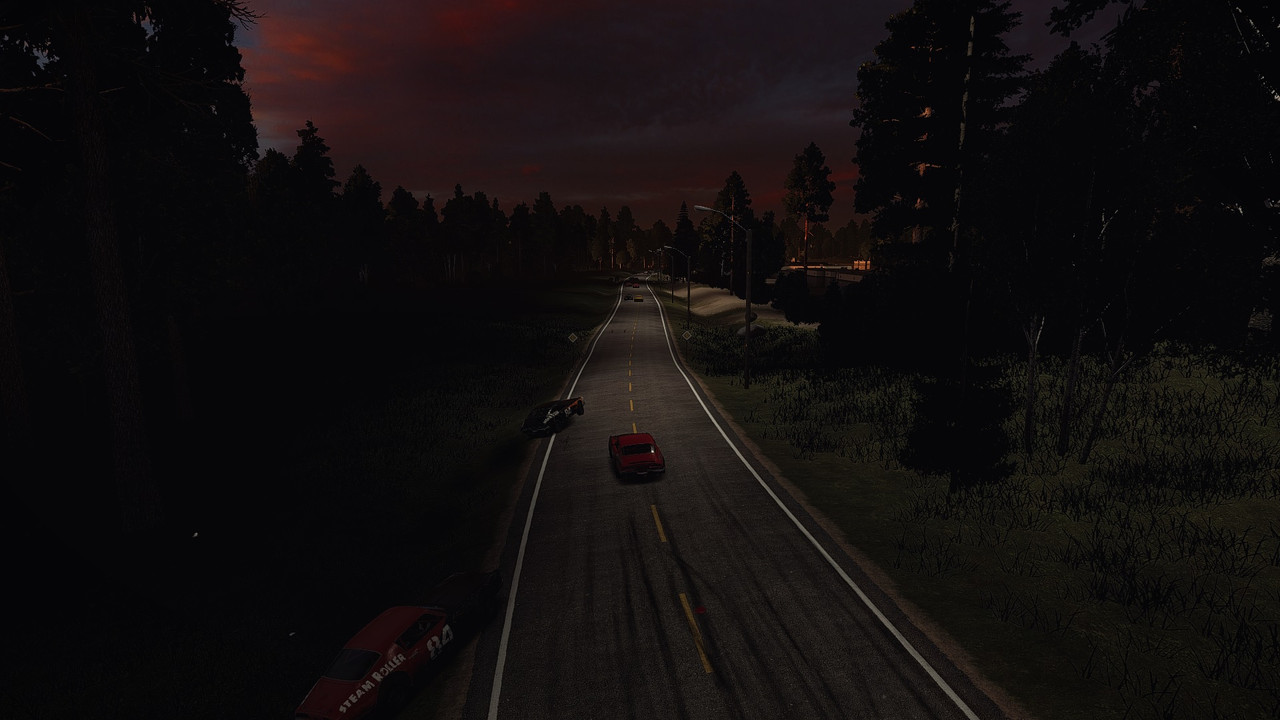 Team Bugbear Member
Ya, saw a few floating trees when I flew around the track map.

So narrowing the aisector or doing it with the safe border lines, did not work to get the AI cars to brake better for sharp turns?

Weeked Smasher
Master Blaster
Not at all hehe! What then happens is that they drive to fast, then they miss the sector, panics and then just drive in whatever direction they feel for. So still has to force the snake movement on them and still they are pretty... avarage at best heh.
Edit:

* AI updated - still not good but better
* Fixed missing bridge collision
* Added a night layout - please note that you have to change the weather, as the night is the standard version with lights
* Very minor performance increase due to splat / texturemap optimization
* Cameras added

Janne Suur-Näkki said:
Also try making the radius of the turn (adjusting the racing line) as small as possible so that the AI will detect is as slow as possible.

If even that doesn't work you would probably need to adjust the AI profiles.
Click to expand...

You might find something in the AI Profiles but a lot of it does look like you can edit it.

Weeked Smasher
Master Blaster
Haha! Thanks thanks! In the real life there road (the part when you take off to right in the second corner) is only about 5-7 meters (in game 9) wide, with trees about a meter from the road. It is pretty insane, hence the speed limit in real life is 50 km/h in that area. Recently it was a Forrest fire here, but due to luck with rain and wind conditions it only lasted for two days with limited damage.

@ TVE , any chance of just downloading a few tracks an not the whole pack ?

Weeked Smasher
Master Blaster
It probably will be hard, as the textures, events, objects and such are very interconnected. Most of the space are textures, objects and that kind of stuff. If you want to download / just keep some of the tracks, you can head into the workshop steam folders, drag out the mod into a separate mod and just chop away the things you don't need. Just remember to remove both the event files for the tracks you don't want, as well as the scne file itself.
I see your point, and I am not trying to be difficult, it just is a nightmare to have several mods to keep updated and functional, which is the reason why I have not split it into smaller chunks. Also then there is the dependency issues that would arise as well...
Again, I see your point, but there is no easy solution to it atm.

Great new map! Thank you for releasing. I would like to note both me and the AI like to get stuck (high centered if you will), on
the sides of the roads. The transition from the road appears to be rather steep in places.

Weeked Smasher
Master Blaster
Yeah the ditches are deadly, and I am a bit torn if they should be smoother or not. The drawback now is that they can make cars get stuck, the positive thing is that they posses danger, which is their aim. Guess we just have to be really carefull Thanks!

I've seen that there are curbs on the side of the road in some places in real life, maybe you could put those instead of the ditches?