Team Bugbear Member
I'm back to working on the Fig8 track pack now. Was doing some testing of the new update for the Fig8 pack online with Zeb the other night and he suggested I do another track using the the big jump in the Figure 8 Derby Ramp Jump:


And I went through and reread my fig8 posts and got thinking this track idea would work good with the big ramp from Stuntfest: 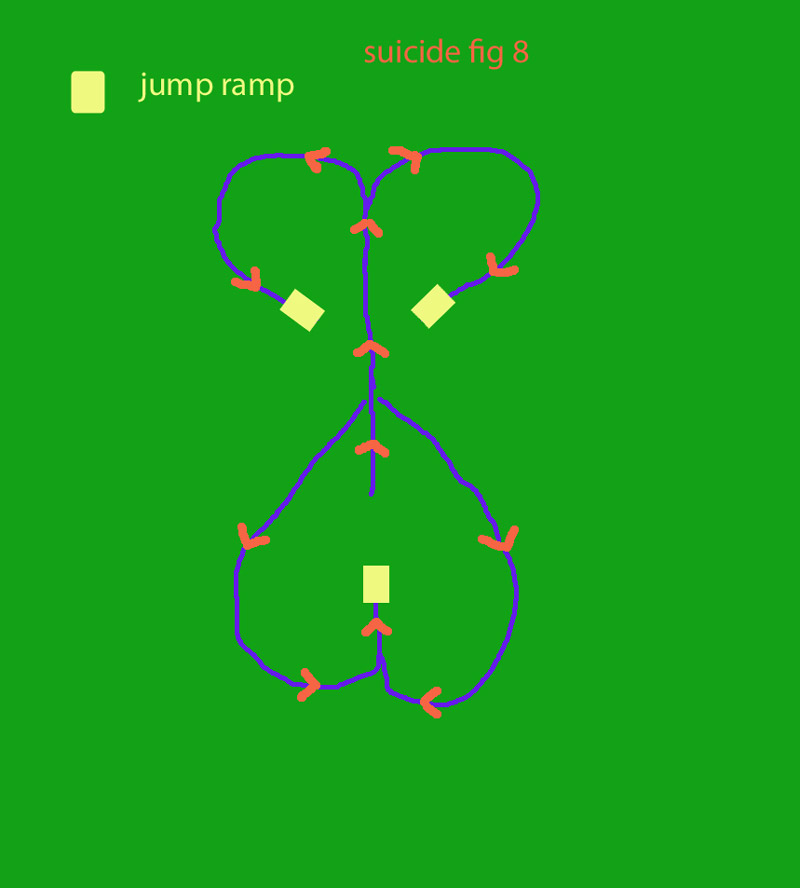 So here what my new Fig8 3Jump Ramps track looking like with the objects place: 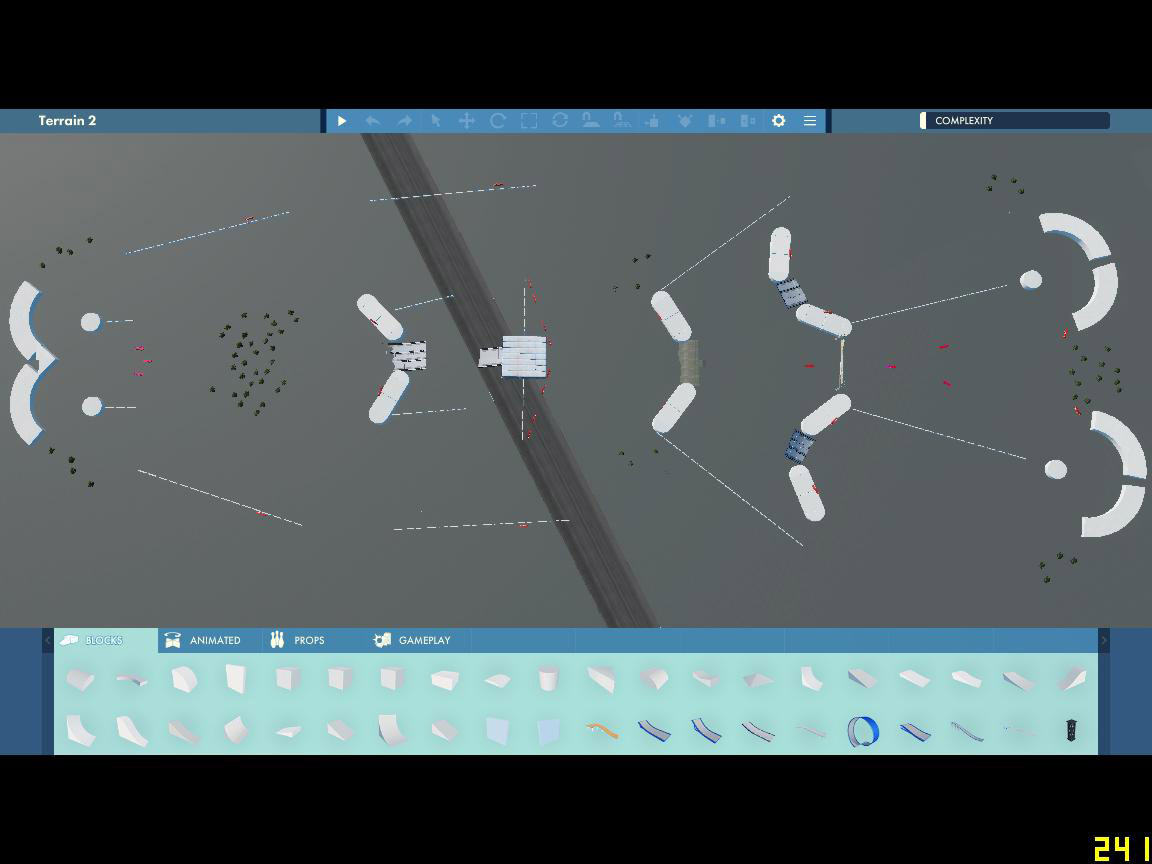 I kept the Big ramp and buses from Figure 8 Derby Ramp Jump and built track out from that spot.

I'm hoping if I get the distance right between the jump ramps, and if 3 cars hit the ramps at the right time, they will meet up in a mid air, 3 way collision.

But with the different speeds and weights of the cars, I don't think there a sweet spot that would work in all situations.


Now I get try my hand at making my first track that uses Alt routes. Good thing End did a tut.

Team Bugbear Member
Success, was able to get alt route working in my new 3 Jump Ramps Fig 8 track and the laps count. Here couple of pics to show how they look: 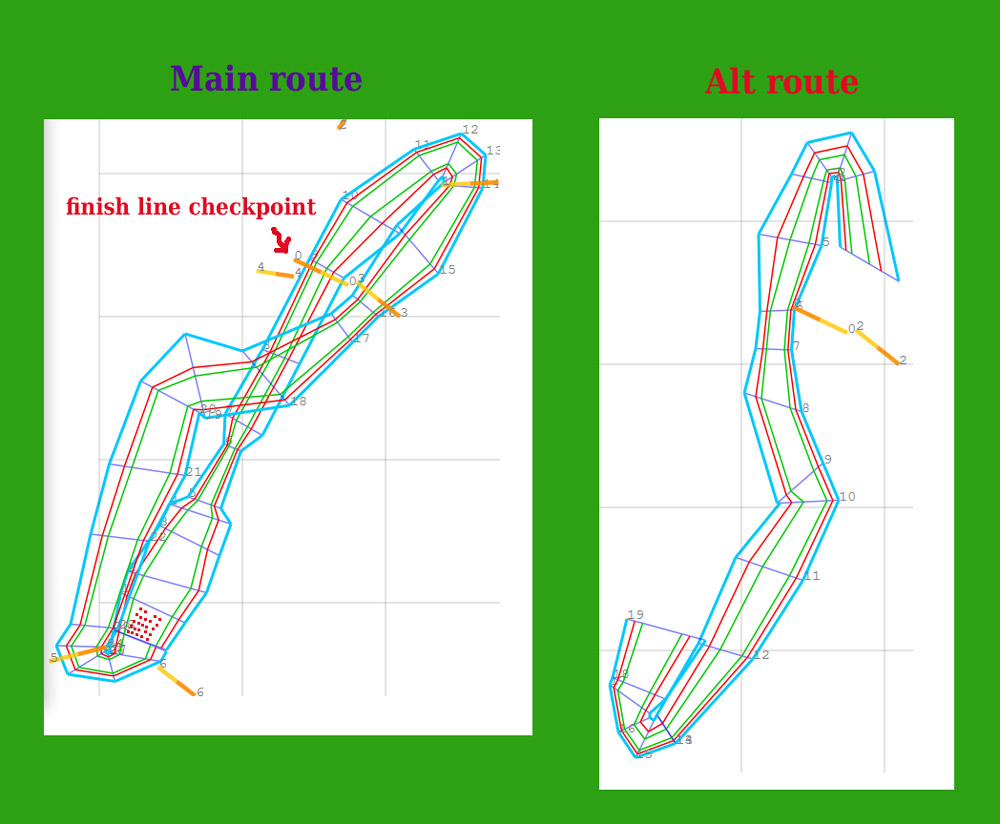 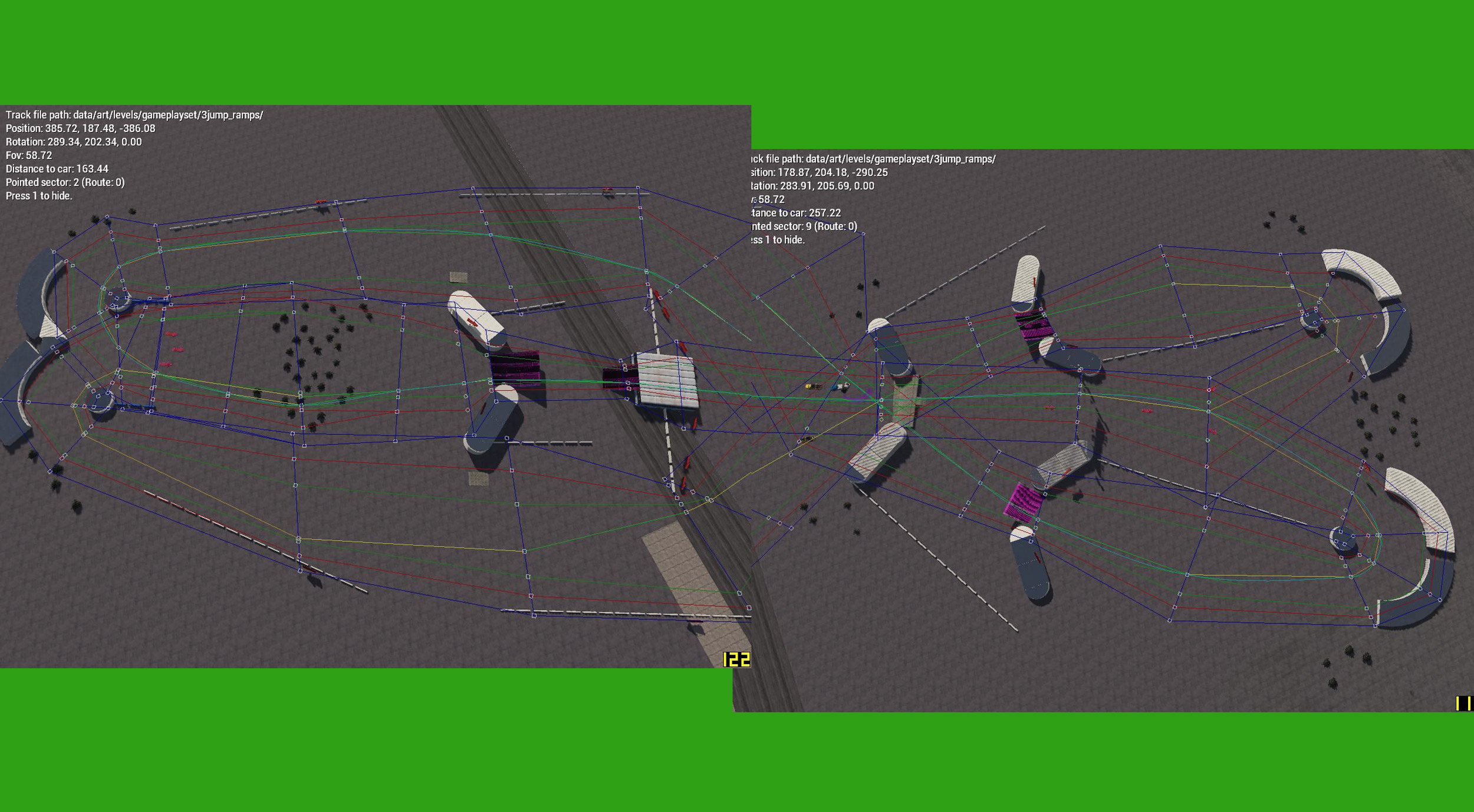 The ai route visualizer tool show alt route checkpoints, but not alt route AI sectors. So I had make copy of my track scne file and delete the main ai sector so there was only 1 ai sector section in Bagedit. 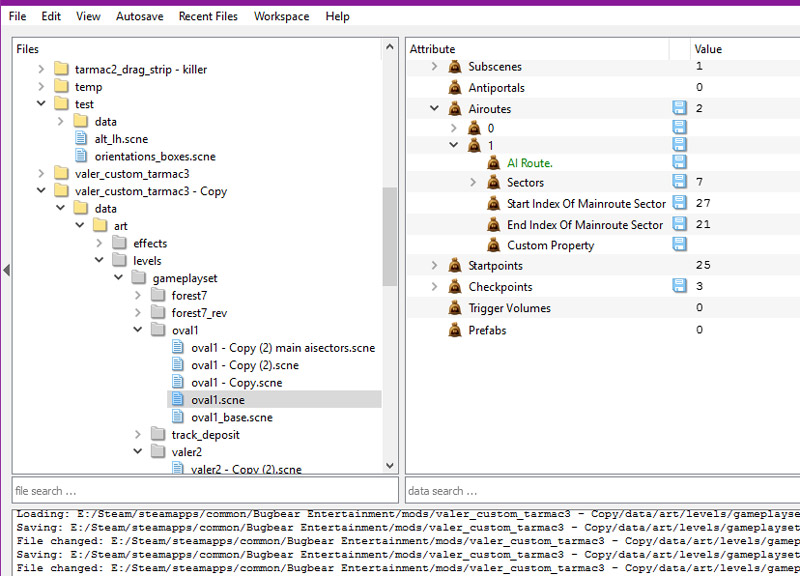 Big thanks to End for doing the Wreckfest track tutorial 06 - alternative paths thread or I would never figured out how to do Alt routes. 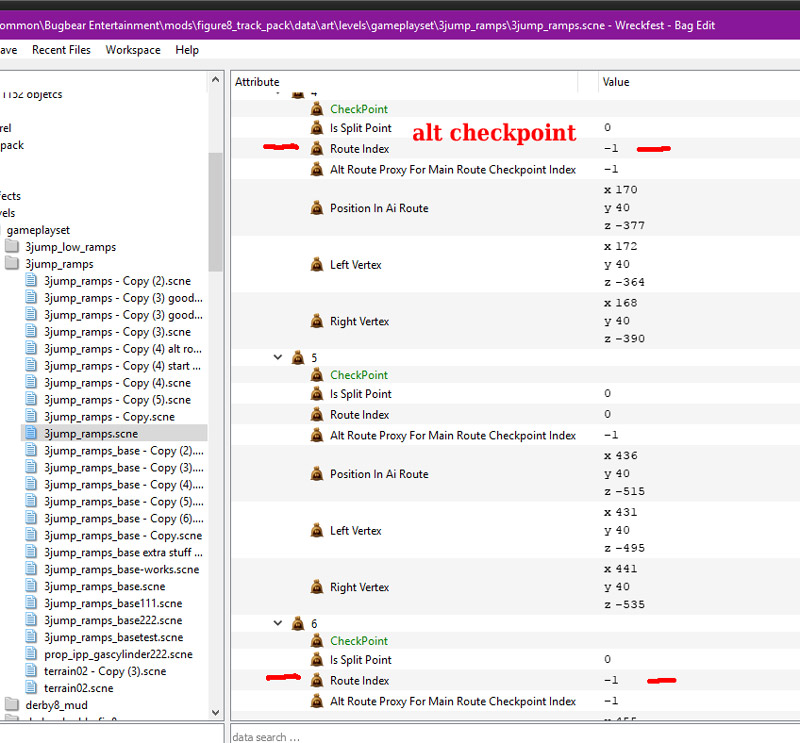 Here some video of new track. I found the Roadcutter getting the longest jumps. But Roadcutter like to get stuck in track map more often than the other cars I tried. Could this be because of the extra visual parts? Like the tires?

Zeb ask, where the mine field? So I will do a 2nd version with a few gas bottles to trigger.

The alt route toggle button is U I think


Purple44 said:
This week I was going through and making sure all the tracks in the Fig8 track pack were loading. Now that the Very TrackPack been fix again by End, the Nevada Depot fig8 track working again.

I was down to my new 3 Jump Ramps Fig 8 track and track locks up in a few seconds of being loaded!


This new track was working fine before latest Build release. So I'm thinking it an object causing the problem. So I start deleting objects from the track file that load my objects, I narrow it down to a half cylinder object was crashing the track. 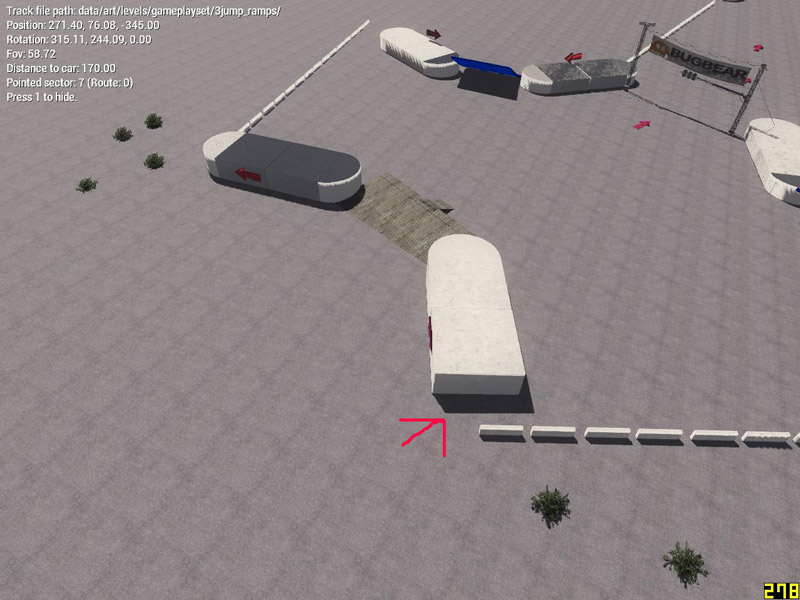 At this point I give up on deleting objects, at this rate I was going lose a third my track. And why would track load first try, then crash on second try?

In pic above, I did move barrier to block player from cheating track. But when I place barrier where the half cylinder object was, track would not load. But when I move it a bit to the right, track would run first time, then crash on second try.

Then I got thinking, maybe this spot on the Tarmac 2 track was causing track to crash now. So I tweaked X and y coordinates so my track objects showed up on different part of track map. And found in my testing if objects were above the track map, track would load and not crash any more. But it I raise the track map to where objects were intersecting track, track would crash again.

Then I got idea, what if I use my large platform object to place my track objects on? 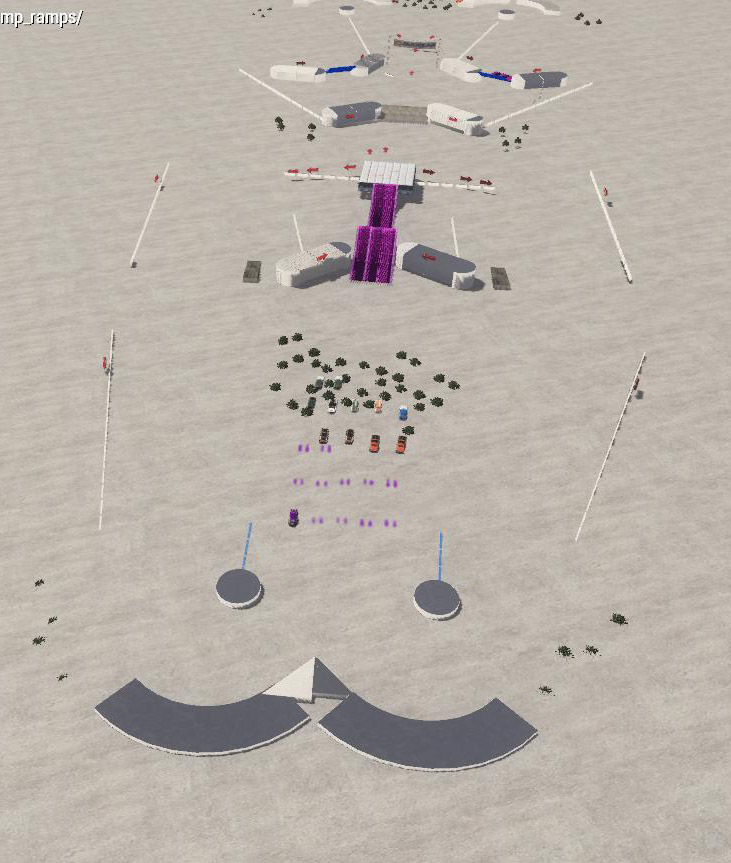 I ran into same problem. If objects above platform, track load without crashing. If raise platform to where objects intersect, track crashes!


So for now the 3 Jump Ramps Fig 8 track is on hold. Maybe I get lucky and next Build release, track work again. Or I may have wait until Bugbear releases a new updated Stuntfest with objects that work without issue with Wreckfest.
Click to expand...

Also I think I will hold off doing an extreme fig 8 track with alt routes that can be blocked, land sharks and explosions until we see final release.

I will try and see if I can turn the Derby Stadium fig 8 track into this double fig8 track: 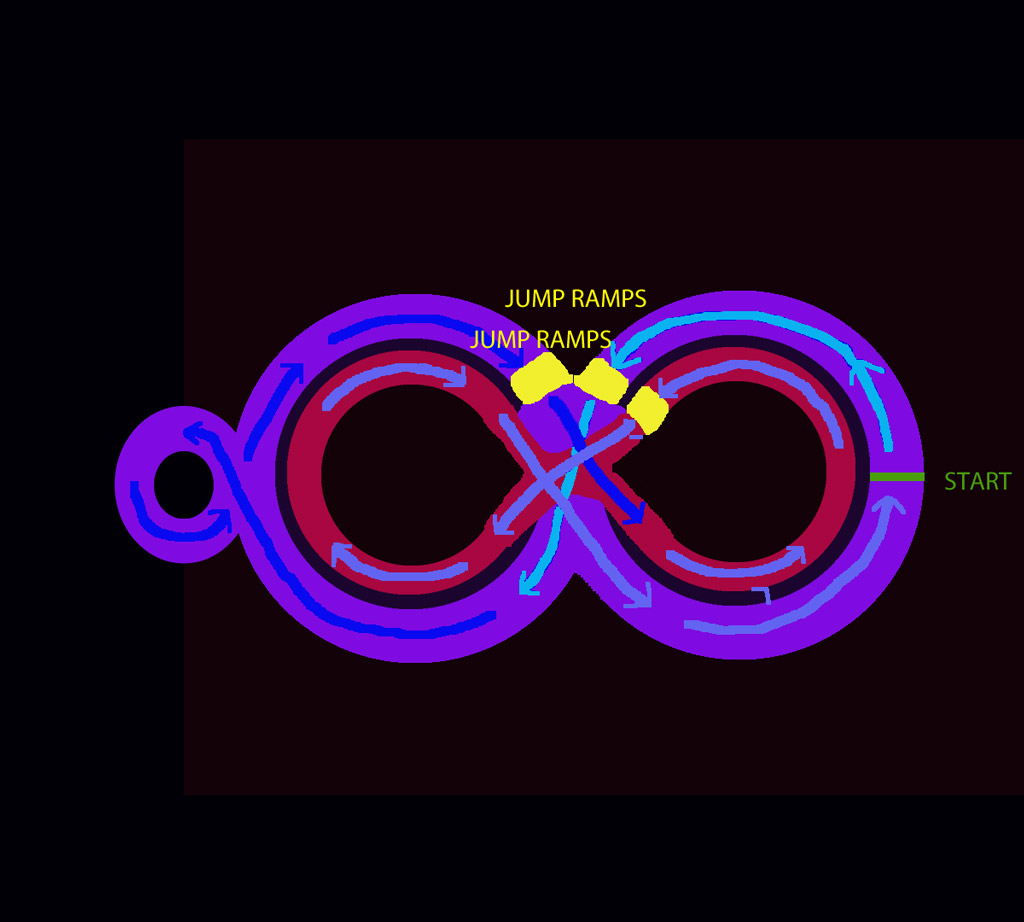 Will have 3 jumps and a suicide tunnel to a 2 way round about: 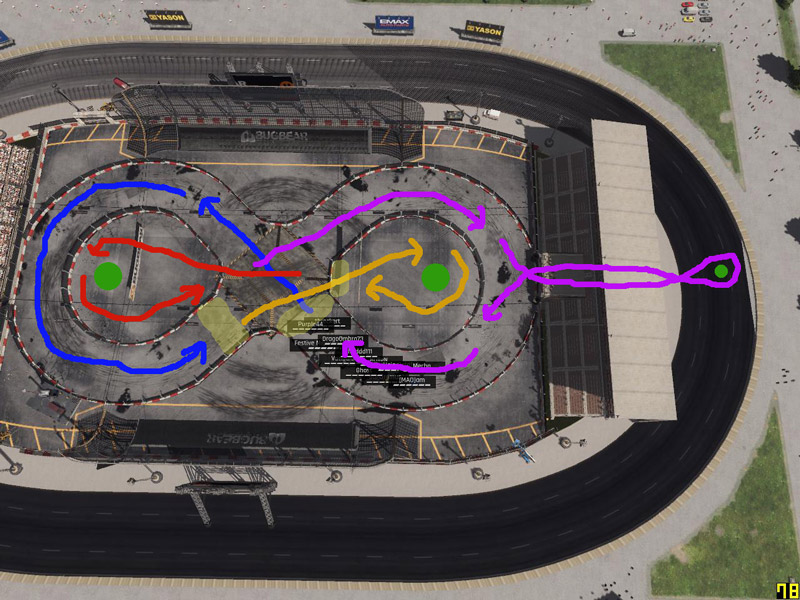 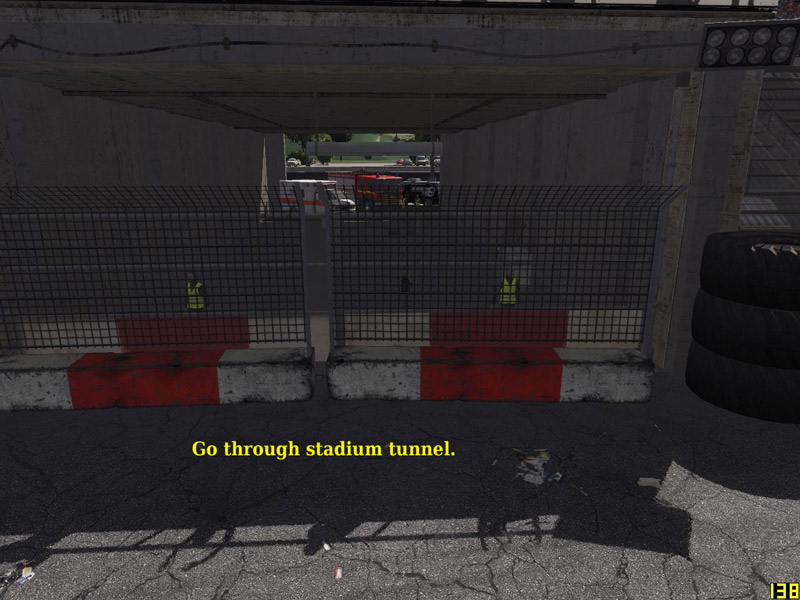 If I can clear the objects out of the way.

Team Bugbear Member
Got a little done today. The tunnel turnout to be all one object. So I had make my own tunnel: 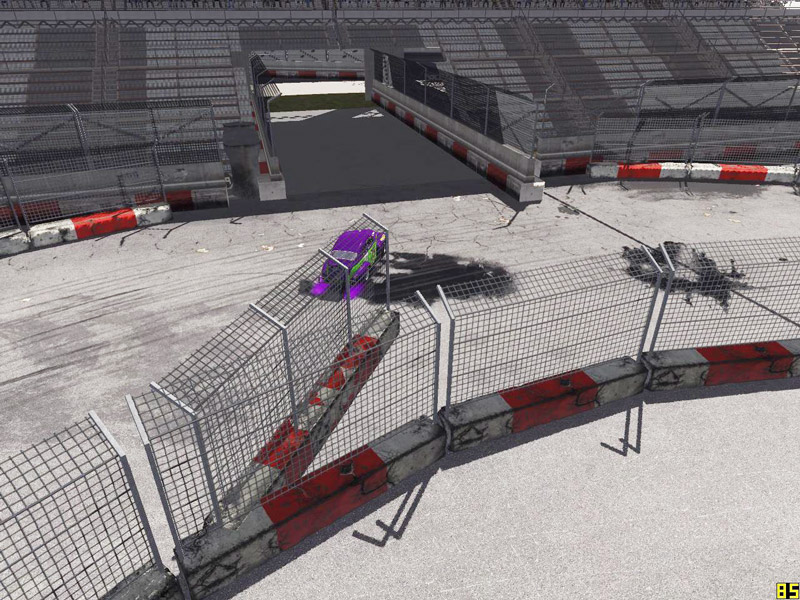 I decide to put the round about off to the side so you coming into it blind. Not seeing the other guy coming, but he not going see you either! 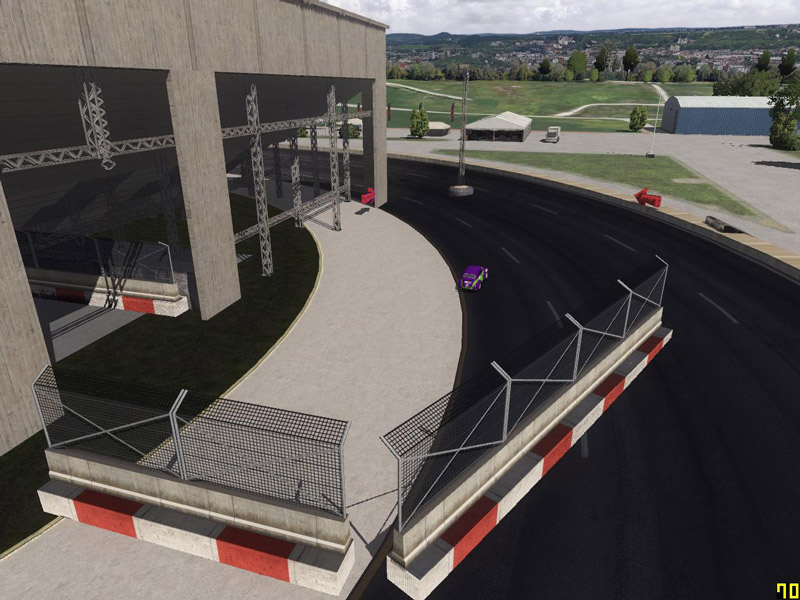 Master Blaster
So I decide I need a Hurtful five (with ramps) fix , but Wreckfest says no, and crashes to desktop with "out of poolmemory" fatal error. ???

Weeked Smasher
Master Blaster
Strange.. are the ramp added as xref? If so, tried to merge them in scene?

Master Blaster
So purple suggested loading The Very Trackpack after the fig 8 mod, which meant some tedious clicking of the move up arrow next to the fig8 mod.
Why is there no down arrow? Why is mod order adjustment a clickfest? but I digress..... :

Zebulon55 said:
So purple suggested loading The Very Trackpack after the fig 8 mod, which meant some tedious clicking of the move up arrow next to the fig8 mod.
Why is there no down arrow? Why is mod order adjustment a clickfest? but I digress..... :

Seem loading the VeryTrack after Fig8 mod overwrites the Fig8 version of Hurtful Five track that has the ramps. Sorry Zeb.

Heddly said:
This is a track from FO2 that is unique in that you follow the track in both directions before completing a lap which creates an additional Suicide track type of game play. Maybe if a Track Modder likes the idea they could recreate it for the game.

Thanks for any interest.

I Loved that track with an 8 shape and different levels/slopes
Click to expand...

I thought of a double figure 8 for Purple44's f8 Trackpack. The cars race the f8 track and reverse course for another round before completing a lap.

As soon as Bugbear give us a Wreckfest track with stairs!!

Ya I need keep this track in mind Heddly, maybe I can found a track where this fig8 design would work.

Heddly said:
I was thinking maybe Speedway 2 Outer would work. I like the route because no matter where you are on the track, other cars could be coming in the opposite direction.
Click to expand...

Working on a new track, Double fig8, hope have it done in time to update mod in time for this Saturday Night Mods night March 10. Go here for details >> http://community.bugbeargames.com/index.php/topic,10065.0.html

Team Bugbear Member
Also, be warned that tracks that have a 2 way round about ( Mud Fig8, Nevada Depot Fig8 and Derby8 Ramp Jump ) will now trigger a red circle if go opposite side of AI. 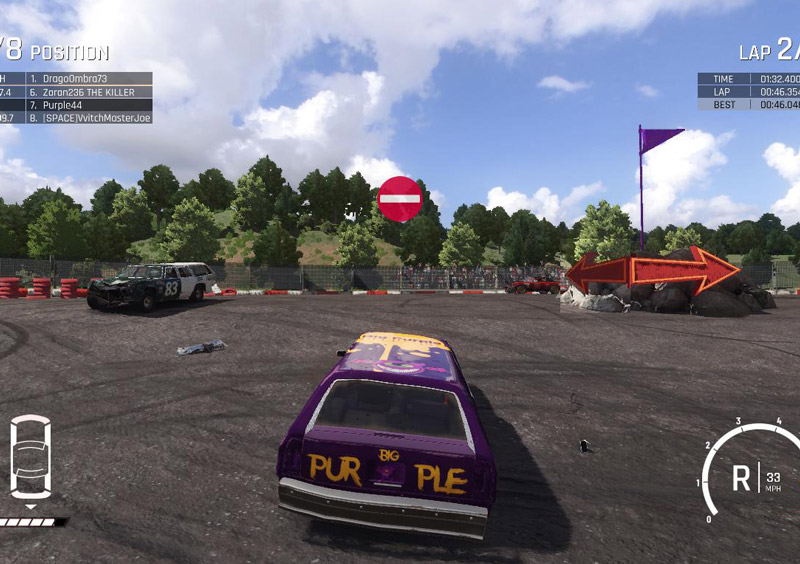 Bugbear decide to get rid of the loop checkpoint that let a player cross checkpoint in either direction. To fix this, I will have to someday make alt routes for these 2 way round abouts.

You can still take either route around the round abouts, if trigger red circle, keep going. Red circle will disappear and lap will still count.

Team Bugbear Member
I almost gave up doing 2 way round about because alt checkpoint kept crashing the game.

Then I remember trick to get some checkpoints to work in my Suicide mod, got alt route checkpoint to work and not crash the game. Don't have time give more details and pics right now. Got more checkpoints to place so I can get new track done for tonight Saturday Nights Mod Night. Got the AI running around the track and now no red circles.

Team Bugbear Member
Going have scrap 2 way round about for now. Can't get alt route checkpoint working all the time. Sometimes alt checkpoint won't trigger when going through and resetting car don't fix it and can't get next lap to count even if go main route.

Seem I'm stuck on alt route when this happens, in-game tool for checkpoints, show Alt checkpoint green and I can't trigger it to blue so I can't move on to next checkpoint.

Bugbear, any chance I can get loop checkpoint back? Was much easier to use and I don't need AI to use both routes online. Just human players and not get the red circle! PLEASE!

Team Bugbear Member
Got a new idea for a fig 8 track using Tarmac 3, something like this:

Will use this track I did for Gokart Raceway Plus and tweak it:

Team Bugbear Member
I did run into a problem of arrow sign I use from Stuntfest, crashing the track. I had place most my objects, track was stable then. Then I start place arrow signs to help point the way, then track started crashing randomly. So I was pretty sure the Stuntfest arrow sign was the cause.

So I ask End if he could make me a new arrow sign and he whipped one up. 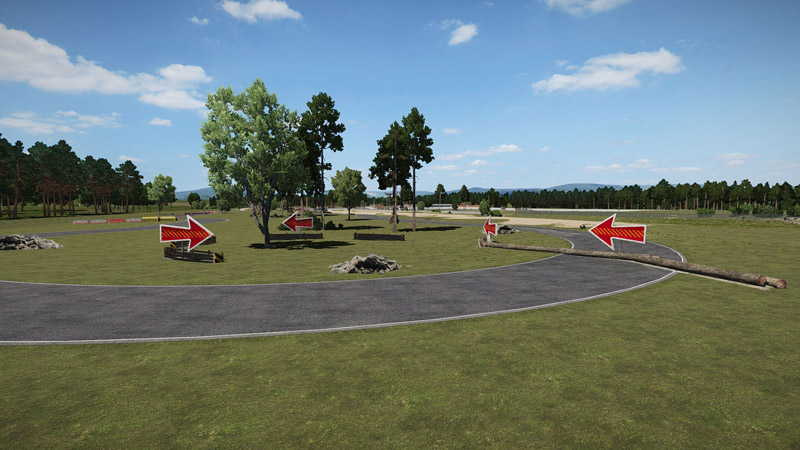 Track became stable again, except sometimes when I race by this flagpole, Wreckfest would crash. 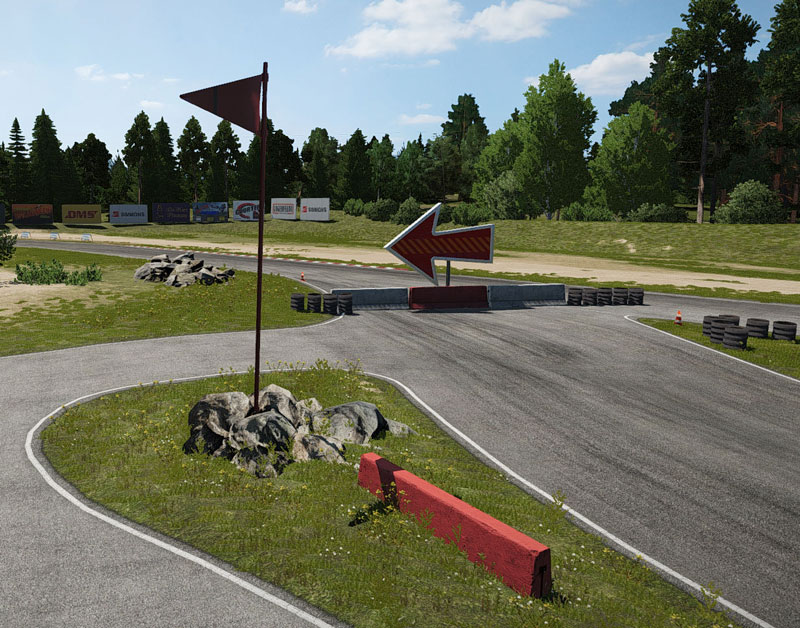 So I got to thinking, could it be a texture issue? Maybe flagpole object using old texture Wreckfest did not like any more. So using Bagedit, I assign new textures from the current Build and now new track not crashing at all now!

I'm thinking I need go through all the Stuntfest objects I use and assign some new textures. Maybe I can get my 3 Jump Ramps Fig 8 track stable again. And replace them arrows.

Last part of video has highlights of the AI taking the jump ramps.

Will need to find a good landing jump car!